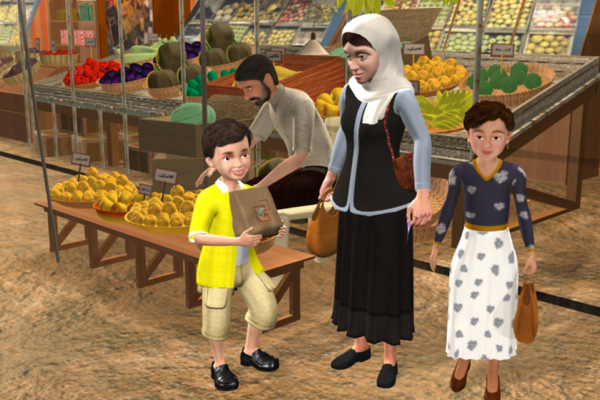 Firdaus Kharas’ Hind and Hamza uses an animated family in the Arabic world to teach about human values. Courtesy of Chocolate Moose Media.

Animation is pretty easy to understand. It is pictures of things that tell stories. It doesn’t have much need for metaphor or allegory because animated characters tend to be cute, humourous, historical or cybernetic. Not many angles to the meaning of life required.

But that doesn’t mean it isn’t serious stuff. Animation, like all forms of art, can change the world. The Middle East region invented animation, those hieroglyphics packed into every site of antiquity.

The first animated sequence was supposed to have been done 5,200 years ago in present-day Iran: five images of a goat leaping. Egypt made picture story-telling famous. This goes on for a few thousand years until Walt Disney emerged in the United States. After that animation was never the same. Its popularity had diminished long before in the Arabic world as animation entered popular culture and became more and more focussed on anti-authoritarian satire or superhero posturing. This didn’t sit well with Islam.

Until recently, when a resurgence of animation has taken hold in the Gulf States. It’s not being driven necessarily by relaxing political attitudes but by computers and a huge demand for local content.

Thirty-six-year-old Mohammed Harib’s Freej – starring four Emirati grandmothers – is the most popular cartoon show in the region since it debuted in 2006. Malik Nejer, 25, is getting there as well with his Youtube channel that has attracted millions of hits and 80,000 Twitter followers during the past three years. Tash Toons is another series amusing children and adults throughout the region. It helps that the Al Jazeera Children’s Channel and Baraem TV (Qatar), the Cartoon Network in Arabic (Dubai) and the MBC Group (Saudi Arabia), among others, are investing tens of millions of dollars in animated series.

This is where Chocolate Moose Media’s Firdaus Kharas comes into the story. Specifically in 2008 when he produced 300 episodes of Nan and Lili, the region’s first cartoon series for Arabic pre-schoolers in their mother tongue. Then in 2011 he made Hind and Hamza for JCC. Another of his children’s series, Magic Cellar, was translated into Arabic. Kharas isn’t some Gulf youngster with big ideas about having fun making money.

Kharas is a middle-aged Canadian from Ottawa who’s long career in public service has made him think deeply about how the world works. While both Nan and Lili and Hind and Hamza may be cute and humourous, their stories are educational with a noticeable emphasis on children’s rights and needs. This fits squarely into Kharas’ public-service-announcement campaigns: anti-HIV/AIDS in The Three Amigos; malaria prevention in Buzz and Bite and domestic violence in No Excuses, all of which are available in Arabic. Kharas’ new PSA series called The Solar Campaign, about replacing in-home dirty fuel with solar lights, will launch in the next few weeks.

Firdaus Kharas is interviewed by Saudi Arabian journalists after being recognized for his contributions to Arabic-language animation. Courtesy of Chocolate Moose Media.

“The Middle East still has very little animation compared to the rest of the world. There is vast potential to use animation to better the lives of Arabic speakers, especially through health education on priority issues like obesity and diabetes which are serious problems throughout the region,” he says.

Later this year he will be back in Qatar to create more animation, a 12-episode series on diabetes, created in Arabic, for the Qatar Diabetes Association and series sponsor Oryx GTL.

“It isn’t about preventing or treating diabetes but about trying to show how children with diabetes shouldn’t be discriminated against and how their special needs understood; it’s about upholding these children’s rights” Kharas adds. These pioneering educational contributions in Arabic earned Kharas an award at a Saudi Arabian health conference attended by 2,200 health professionals in April.