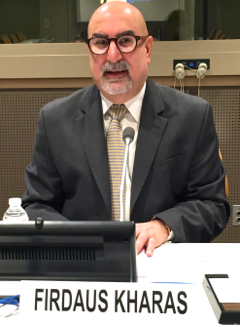 This speech was delivered by Firdaus Kharas at the United Nations’ Infopoverty Conference April 10, 2015. In its 15th year, the conference at UN headquarters in New York has become the annual appointment for high-level participants to confront and evaluate the progress of the current digital revolution and the best solutions to defeat poverty through the new information and communications technologies (ICTs).

Thank you very much for the invitation. It’s a pleasure for me to be back here.

I think that the world has come to a new point in history. This age is characterized first by the possibility of reaching almost every person on this planet with two-way communications. That’s the technology part.

It is also characterized by two other parts: the increased ability to understand and overcome the barriers to communications that separate human beings, barriers like culture, language, religion and so on; and the diminishing role of the state and the rise of non-state actors and ordinary people everywhere in the world.

These changes are creating new challenges and new opportunities, and there is a greater need for us to better understand the barriers and impact of instant communications.

The ITU (International Telecommunications Union) now estimates there are as many mobile phones in the world as there are people – about seven billion – with about 89 percent of the population in Asia and about 69 percent of Africa now having mobile phones.

I think that development experts have not grasped is how this can directly and immediately impact people’s lives.

When we did respond, we spent as an international community hundreds of millions of dollars to send doctors and nurses to treat those who were infected. We paid very little attention to stopping the infections in the first place.

If you don’t believe me, I’m going to quote from the coordinator of Médicins Sans Frontières, Claudia Evers, who said “In the first nine months (of the epidemic), if people had been given proper messages, all this could have been prevented.”

You have to understand that we’re talking about people’s lives being lost because people did not get the proper messages according to the emergency coordinator in Guinea, where it all began.

That’s a very good example. Media could have been disseminated in a large number of ways, including by mobile phones, television and radio. Content is what’s important.

We have to realize when we’re sending out SMSs or creating posters and pamphlets, which many of the international organizations did during the Ebola crises, that sometimes the literacy rate in some of these communities in Africa where the crisis was happening is less than 20 percent.

They can’t read, many of them.

So you can send all the posters and pamphlets you want but if they can’t read them, they can’t understand the information. And Ebola and other crises are going to happen again.

So visual media is what I specialize in, where you don’t have to have literacy, you don’t need to be able to read anything at all.

I’m going to take some time to show you the emergency creation that we did. The video – Ebola: A Poem For The Living – is only four minutes long. It was created in collaboration with United Methodist Church and Iheed of Ireland.

We created it in about three weeks after deciding to do it, at a minimum cost of US$15,000. If even a single person was prevented from getting Ebola after seeing the video, just one, it would have been cost efficient. Within a few months we had translated the voiceover into 17 local West African languages. Originally I created it in English and French but as it got more credibility and more views in West Africa, more and more countries asked for it to be done.

So we created it in 17 languages and to the best of my knowledge, you won’t believe it, but one year after the Ebola crises started, in many communities this is still the only visual media available to them in their local language.

The one you’re going to see was designed to stop the Ebola crises as it was happening so it had a completely different approach and message.

I’m just using Ebola as one example. Much of my work has been on the world’s biggest health challenges like HIV/AIDS prevention, malaria prevention and so on. Please go to my Website and have a look at it.

To give you an example of this Ebola video you’re about to see, a foundation in Nigeria put it on their Facebook page and within days had 350,000 views and more than 10,000 shares. Just on one Facebook page by one foundation.

That shows you the lack of visual information and communications because if something comes up it is embraced immediately by the population and is much more effective, in my opinion, than creating pamphlets and brochures for a literacy rate of less than 20 percent.

So please watch the video. Thank you.