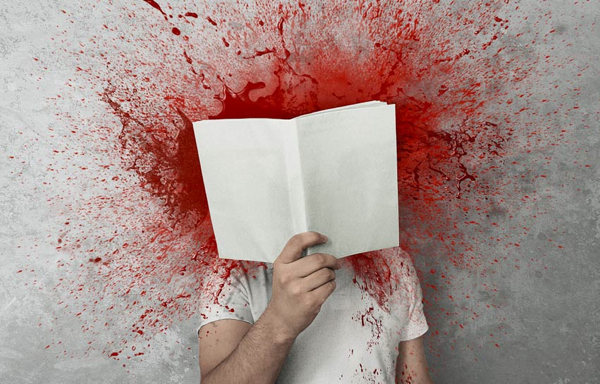 You can tell someone that a book blew your mind, or you can show them. Which is more powerful? Courtesy of mladenpenev.net.

Some issues don’t communicate well with only words to define them. Try explaining the horror of an Ebola epidemic with a simple list of symptoms. Hemorrhagic fever sounds bad, but a photo of a sufferer bleeding from his eyes needs no other explanation.

That’s why images have faster power to open people’s brains and spur them to action. The results are not always positive but at least they create the potential for change.

When Chocolate Moose Media tackles an issue, images are always a critical component of its approach. It uses animation to create strong visuals without reality’s harshness.  Animation has a way of crossing cultural, age and political barriers with ease. Many of the issues that company founder Firdaus Kharas wants to illustrate are highly emotion-packed. Using animated humour to confront HIV/AIDS prevention in The Three Amigos, malaria transmission in Buzz and Bite and domestic violence in No Excuses, among many other problems, makes the issues easy to absorb in a non-threatening way.

Its most-recent project about Ebola could find no humour, but makes use of smooth animated sequencing and poetry to get its message across. It deals with a young Ebola victim as he tries to get his family to understand how much he needs them but also how they should keep their distance.

“I spend a lot of time on design, which is a key part in creating breakthrough innovation and effective communications.  Creating magic starts with a blank piece of paper and built with words and drawings. We use visual media because we understand that human beings are influenced by all their senses, particularly hearing and sight,” says Kharas.

Chocolate Moose Media’s new Website was released yesterday as Kharas spoke at the Game Changers Summit in Nashville, Tennessee, about using media for social change The new site is all about using visuals to make behaviour change communication available to the maximum number of people. The site’s scope combines Kharas’ range of projects that run from early animated children’s TV series in Asia and the Gulf to refugees and dementia and to the quest to replace kerosene lamps with solar-powered ones (The Solar Campaign) right across the developing world.

Please drop by the site and see how magically stimulating Kharas’ images can be.